Simon and I met yesterday 23rd of August, 2017  in Portsmouth and discussed about the  project as he is going to Ethiopia for a holiday – this is going to be his third trip. On his way, Simon is planning to meet our local project leader, Molla Chebud, in Bahirdar.

In our meeting yesterday, we talked about our progress: 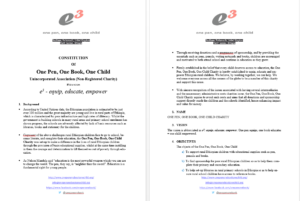 The constitution will help us to open a bank account and operate under UK laws. It was proof-read by project members  and  we will call a meeting to approve this document.

Simon got the electronic sponsorship forms to work on the website so that people who are interested to support us can easily get in touch with project leaders. The website is professionally designed in terms of its layout and readability. Underneath it has embedded links to the blog, Twitter and the PayPal donation link.

It was on June 20th 2017, just four days before our wedding, Etse and I travelled to the city of Gondar, in Northern Ethiopia, 730 KMs from Ethiopia’s capital, Addis Ababa, to meet some of the rural school children we planned to support through the one pen, one book and one child project. Twelve children accompanied by their teacher, Molla Chebud, came representing their schools from a remote village in Telemit District in north Gondar – they are either orphans or lost one of their parents, considered as “poorest of the poor”. But I’m sure you may be happy to hear that your donations of money to buy books and stationery reached these and other rural school children in Gondar. We managed to purchase several hundreds of books. A total of £1,600 was spent on purchasing books (for two libraries), builder cost for one library, shoes, clothes, stationery (for 28 selected students), transportation and accommodation for the twelve children and their teacher who came from Weyila primary school to Gondar. As you may remember, the money was collected through the JustGiving website, from friends as well our own saving from coffee and wedding costs. 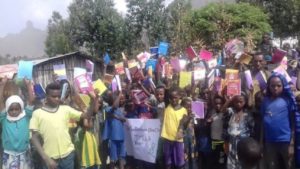 It brought a lot of encouragement and smiles for them. The primary schools do not have reference books nor a library. However, as the news about book donations reached teacher Molla and his students, they decided to build one and with a little help from us towards builder cost, they are building a small room from wood and mud and they are naming it One Pen One Book One Child Library. 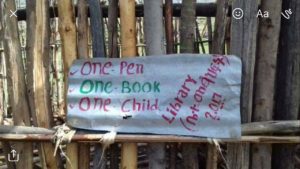 The idea is getting momentum and along with friends such as Simon Beck from Portsmouth, we are setting up this website and planning to extend our help in the future. Through the donated money, we purchased locally published books (which will be distributed to two schools in particular) but we also managed to support other kids who came our way. School is just closed for the rainy season and the books and some of the stationery will be kept by teachers until September. 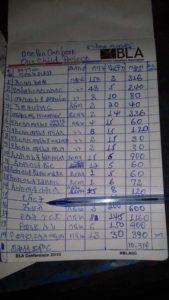 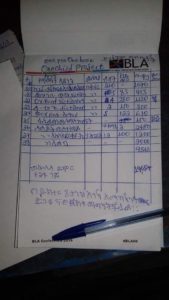 Teacher Molla listing the stationery and books he received  from us

We managed to get some clothes and shoes for 28 children who were selected by their teachers as orphans, single parent or poorest of poor. We asked Molla to bring twelve of the children from his school and we paid for their transport and cheap accommodation in the city of Gondar. When we met the twelve, we saw some of them came barefoot.

It was their first time to the city and they had never seen electricity, asphalted road, so many cars or tall buildings – they were exhausted from a long trip but were very happy to see the city of Gondar. We gave them t-shirts and stationery we brought from the UK. We then took them for lunch to Jantekel restaurant located in the city centre – followed by a guided tour of Fasiledes castle. Because at the heart of this project is to encourage and motivate them to go to school and withstand their many challenges. We used the opportunity to lift their spirit and tell them our own stories. They went back to their villages encouraged and we asked them to encourage their friends and as Molla later tells us that they were very happy about their experience in Gondar. 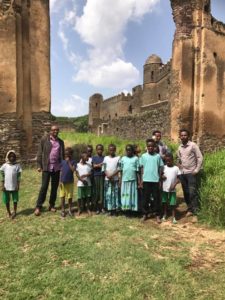 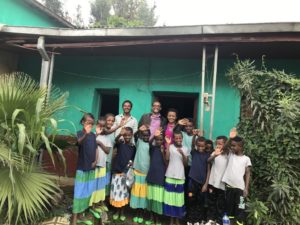 They got some clothes and shoes

The donations also went to Guntir Primary School where I grew up. 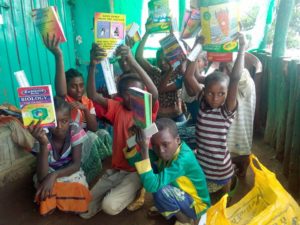 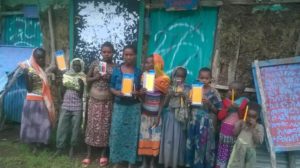 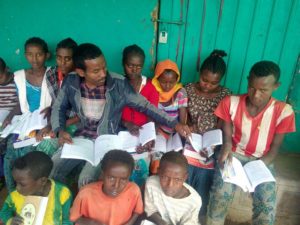 And yes more children at Weyila primary school benefited from the stationery gifts – but as you can imagine there is just so much need we could only do what we can. 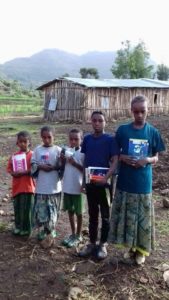 Whilst the scale of the challenge these children face every day is significant, we are hopeful that we can all contribute to see some changes in their lives especially through stationery and books. As Nelson Mandela said “education is the most powerful weapon which you can use to change the world” and indeed the best way to do this is by instilling courage and hope in these young children so they can face the challenges head on and come out of it shining. These children need our continued support. Simon and I will outline how to best do that. The plan is to find the children sponsors who can cover costs for stationery, shoes and books = £100/child/year. Etse and I will sponsor two of the children, we have not chosen whom yet – Etse loves all of them though. Mandy Reeve and her husband from Southampton agreed to sponsor another two. Chris North and his wife also pledged to sponsor one child. 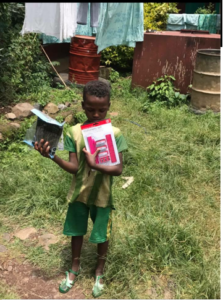 His mother is unable to afford to send him to school. He is one of the most active and inquisitive boy I ever met. He aspires to be a teacher when he grows up. Listening to his story, Mandy Reeve and her husband Kevin from Southampton want to sponsor Belete as he especially wants to be a teacher. Mandy herself had taught young children in the Bahamas and she wants to help him in his school. They also agreed to sponsor Fitigie Zewdu who is currently living with her poor mother. 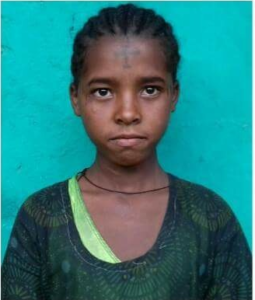 We are hoping to find sponsorship for the remaining 23 children at the two primary schools.

See photos and description of some of the children. 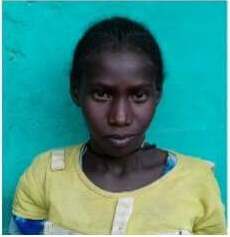 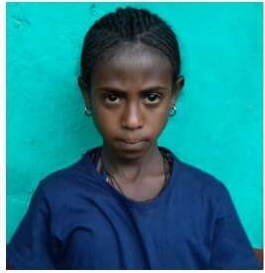 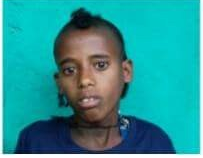 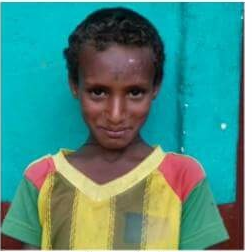 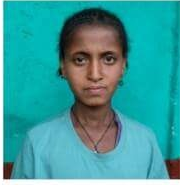 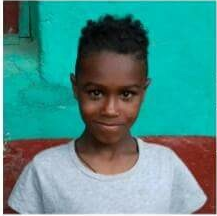 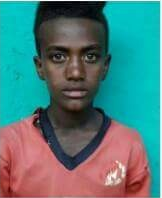 Hagos Belete, M, 13, lost his father, whose mother gives him away for hire to herd cattle, he drops school during exam time, he was supposed to be year 7 but still in year 2 (2nd grader). 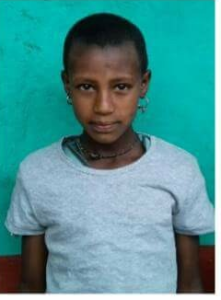 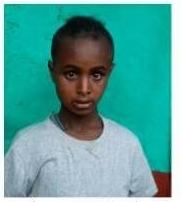 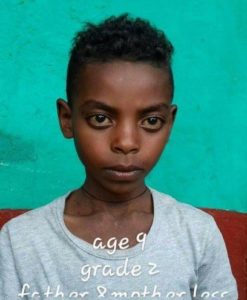 If you want to sponsor a child, please contact us. We will set you up with teachers and the children themselves and can start communication. Be part of the one pen one book one child project and change lives.

Keep checking back for updates on our projects from Getch, Simon & Molla.